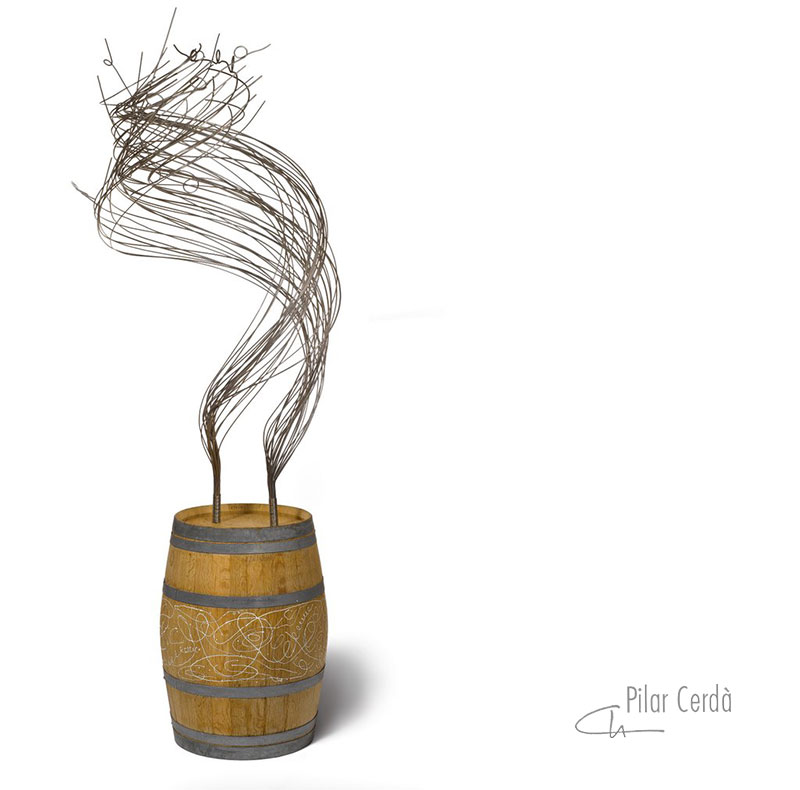 Bodegues Ribas present the second edition of the “BotArt” Project, which consists of an artistic combination of wine barrels transformed by resident artists in Mallorca.
The objective of this innovative and original project is to allow a series of local, national and international artists, somehow related to Mallorca, to freely intervene on oak wine barrels, thus promoting and uniting the wine world with artistic creation.

The pieces were exhibited in an itinerant exhibition with final venue in the winery and the presentation of “BotArt” second edition.

The exhibition spent two months in the Bodegues Ribas winery in Consell, Mallorca. 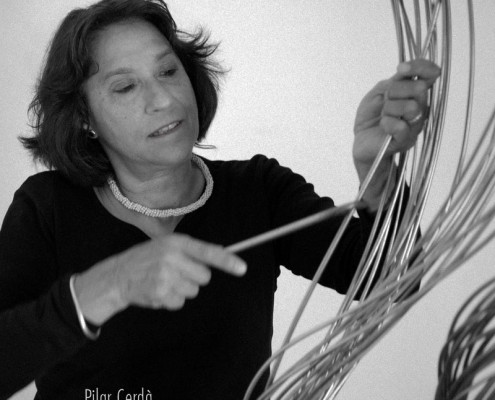 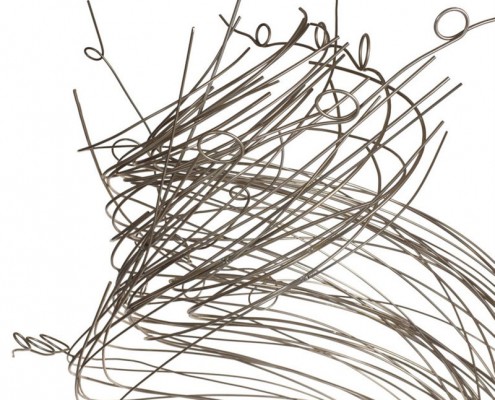 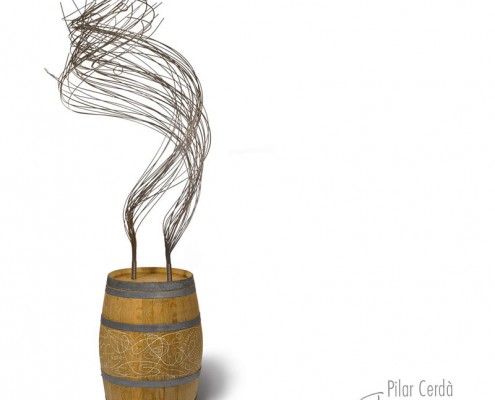 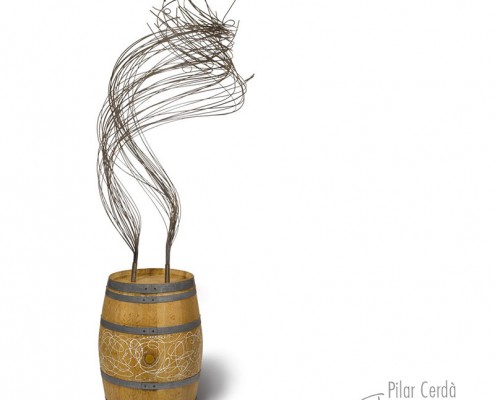 Each cask is a temple to Dionysus. Each glass of wine a kind of prayer to this god who symbolised strength, music and the combined happiness of the ecstasy of the senses. With reference to this god, the philosopher Friedrich Nietzsche placed Apollo as the symbol of the principle of sight, form and beauty. In a certain sense Apollo is the order which Man seeks so as to retain what distinguishes him in nature; reason. What are we concerned with here? Art, evidently. Art in capital letters, which in essence is a shapeless and powerful magma which when emerging as a natural force invades, penetrates and fills everything, but which the artist, the ambassador of Dionysus, when he acts, manages to subdue for the satisfaction of Apollo. The entire history of mankind lies between Dionysus and Apollo.

The proposal of the Bodegues Ribas to bring together art and wine is far more important than what it may appear at first glance. As it is not only here, in this part of the planet bathed by the Mediterranean, this area of ancient civilisation which has spoken with the gods at the shade of a vine, an entire, age-old culture based on the cult of the wisdom of existence has been developed – in fact from the word “cult”, referring to worship, also comes “culture”, and this connection of fine intellectual acrobatics is a purely Mediterranean contribution – which has also conceived this fruitful dialogue as one of the most encouraging forms of development to realization. I refer here, and I will now end with mythological references, to the tradition of the concept of ambrosia, which is understood as the so-called “food of the gods”, special food and drink which are different from those of the mortals. Epicurus believed, and quite rightly, that what distinguished men from gods was the capacity of the latter to know how to choose their food: to ingest only what was suitable, the exquisite from a stand point of immortality, they did not wither nor fade and so remained timeless. Men often choose poorly, which is why they are beings who finally die. This concept today, with all the problems of transgenic food and environmental alterations appears to be surprisingly contemporary, isn’t it?

Wine, with tannins of immortality, naturally fell within the concept of ambrosia. These powerful antioxidants, which also give the elixir of the fermented grape its taste and its smell, the loftiest fragrance which could ever be desired (speaking for myself, if stranded on a desert island I would only take wine), make the culture of wine our only true culture. And if art is one of the few manifestations which Man has for reaching eternity, the key of the intimate relationship which Bodegues Ribas has taken up with so much enthusiasm, between art and culture, goes far beyond a mere programme proposal. Araceli and Javier Ribas, together with their mother María Antonia, have hit a target much larger than that which perhaps one could not even choose without the baggage of the 300 years of tradition which the winery has behind it in this almost “argonautic” search for the gates of heaven.

But let us move on to this second edition of “BotArt” and the participation of 18 artists. Their choice has been made with the utmost care, with criteria based on a series of suppositions from the gallery director which followed the priciples described here:

In accordance with the contextual experiences of modern life, in the throes of Post-modernism, which has brought our world to the end of the era of the so-called “grand narratives” – i.e. contemporaneousness in equal conditions for other voices and other worlds, the discourse of this exhibition seeks to reflect this situation in today’s art, where minimalisr or post-conceptual language is as valid as Infrarealism (according to Bolaño) or the new Post-Abstract abstraction. This contemporary plurality of languages characterises our cultural and artistic present, and in the “BotArt 2” exhibition the objective has been to clearly reflect the phenomenon.

However, and in the same way in which basic juices are mixed in the creation of a complex wine, those obtained from native grapes with notes from grapes from afar, to discover new tastes, in this event local artists have participated to produce a final bouquet which, ijn keeping with a secret master recipe of the direct-oenologist, several additions of quality from external sources have also been incorporated, in some cases, with artists born outside of the island but who live here, such as Chris Pink or Katharina Pfeil, and in other cases, artists who do not even live here, as is the case of Juanjo Castillo. This has resulted in this peculiar mix known as “BotArt 2”, artistically created, but in the manner of oenological science, in order to attain a new level in the search for the most excellent of ambrosias.

In reference to the entire series as a whole, one has to underline that the proposal of such a specific format (a special kind of site-specific work) for artistic intervention, fragile in time, the mature skin of the ambrosia, circumscribes the action to a highly determined cultural field, exactly where Dionysus and Apollo are to be found. With this point of view the cask is perhaps one of the most authentically artistic supports which could be used.

Finally, and bearing in mind modern interpretations of volatile work or work which survives only briefly (the interventions of Miquel Barceló, with fermented elements in small boxes, manifesting their internal, slow kinetics which connected with the avant-garde movement in the early 20th century), the work of artists on wine casks, as well as incorporating this baggage, as barrel brackets require special maintenance, as they are object-supports which recall this Mediterranean life in which relationship among beings is a substantial part of a way of understanding life, and which finally places us in the contemporary vision of “relational art”, as described by Nicolas Bourriaud, and even in the development of post-production which has invaded today’s art. The concept of art as a “state of encounter” and the idea that “form may be defined as a lasting encounter”, which in essence comprises those ideas which are bandied in this proposal, are in turn strictly Mediterranean manifestations where they exist; as well as beign absolutely contemporary.

With this suppositions a selection of the work has been made, which I will briefly describe, artist by artist:

Steve Afif, like any true Egyptian (he was born in Alexandria in 1943), has wrapped the barrel in bronze as if it were a mummy, he has embossed it and moulded it preparing it for the great voyage to the beyond. It is an extraordinary piece which also communicates on different frequencies (communication as a palimpsest), as one never knows, who will come in the next few hundred years.

Antoni Amorós has worked on his cask as if it were a primeval cave, with himself as an artist of the first stage of agriculture as culture; a highly justified manner of accepting the challenge and succeeding. Art as a skin which reveals, like an open book, all that has been lived and all that has been dreamed.

Juanjo Castillo, with a pop-art, impertinent work which signals the relational nature of the challenge (the name of all his friends do not appear on the cask for nothing), and whose iconic image of himself recall the technique of the artistic couple Martín and Sicilia.

Pilar Cerdá has managed to show us the vaporous poetic emanations of the immortal bouquet, with a work which follows on from the artistic tradition of Andreu Alfaro and José María Labra.

Tomeu Coll, whose work is consciously structured within the tradition of the Greco-Roman jars which were used to transport the di-vine wine in ships up and down the Mediterranean, and spreading the culture as it was.

Joan Costa has worked on his barrel from its last piece – in which he incorporated air and movement – to the work in the lap of a highly japanese inquirí which cannot be seen but felt.

Antonio Fernández-Coca has taken the barrel as a kind of pedestal, for a futuristic carnivalesque figure, filled with color and uninhibited, which could be related with a character from a Dionysian bacchanal in the planet where Kryptonite is found.

Toni Ferragut, with a proposal of intense visual impact and a large amount of conceptual bearing, it is not surprising that no one ever dared to imprison Dionysus before.

Pere Joan, a well-known comic artist who has worked on his cask in the manner of his profession with excessive irony which at the same time curiously recalls the works of fine artists such as Liliana Portero ot Baltazar Torres.

Pere Lacomba, with a work which is realistic in character but difficult to ratify, he has devised a reticule of vines in which the leaves and the clusters are inside the barrel, producing the fermentation of the wine, yet in a formal sense the work appears to be a work of the latest biological generation, somewhat in the manner of the works produced by the artist Iñaki Gracenea.

Aina Lorente, has worked with layers, canvases and photographic portions, so that thorugh this “deconstruction” she tells us about the birth, maturity and death of the vine.

Pep Llambías, in his current minimalist-conceptual phase, takes the barrel as a placenta, in whose interior lies the miracle of life and creation.

Esther Olondriz has worked on her cask using traditional collage techniques, but in a vital language which reminds of the language of the Seville School where Luis Gordillo was the main referent.

Katharina Pfeil, has contributed with a magnificent, magical and mysterious piece in which the reflections of the black water inside the barrel reflect the darkness within us all and which wine reveals like an astute confessor.

Chris Pink has drawn a labyrinth of geometric wire on her barrel, which lies over a previous, extensive, meshed work, from the base of the surface of the support; one might say that her intention is purely agnostic with respect to the saga of Dionysus.

Ferrán Pizá, who represents the avant-garde tradition in its literal sense in the exhibition, with formal representations among abstraction and late realism, his conception of art as the final trench in the face of a threatening force.

Julia Ramis, the pure Mediterranean, the colours of the earth, the tastes of the light of the south, the festivals where wine is the high priest, facilitating communication with the sacred which exists but cannot be seen.

Finally Menéndez Rojas “Mendi”, he is the only artist who has tipped his barrel over to transform it into an enclosed ocean in which a happy whale, undoubtedly a fan of wine in abundance, is diving, without the faintest idea that it has no horizon.

A selction, which as can be seen, is highly fruitful, promising and has given shape to a new wine, “Botart 2”, with a long and well documented bouquet  and grand finesse which is also a fundamental tool for understanding art in our time, in our land and in our unique culture, one whose milestones are undoubtedly located in the Bodegues Can Ribas. Thank you for 300 years dedicated to art! 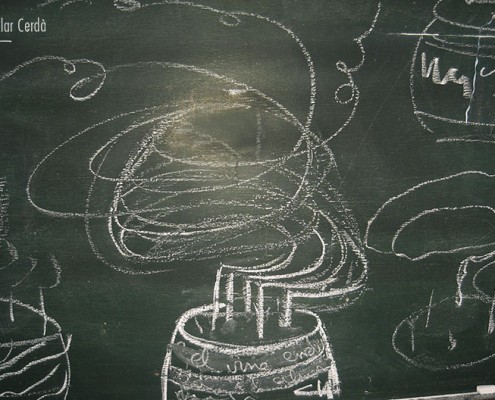 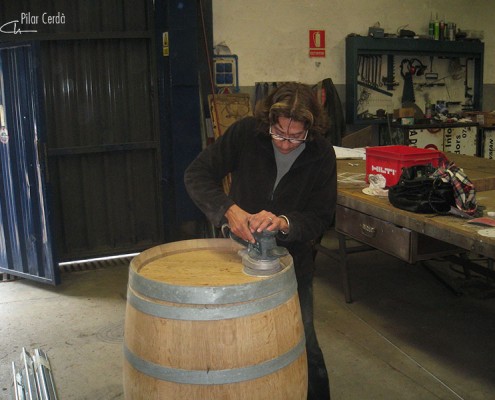 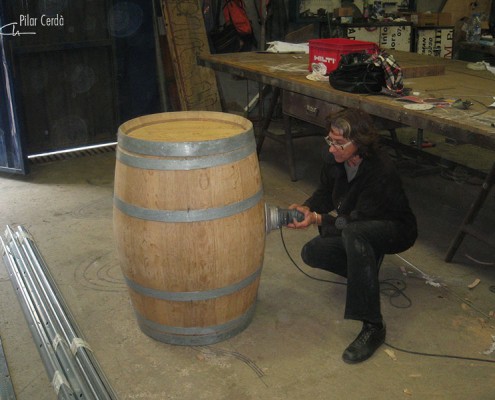 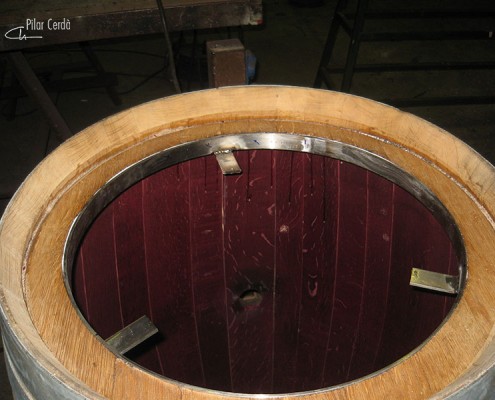 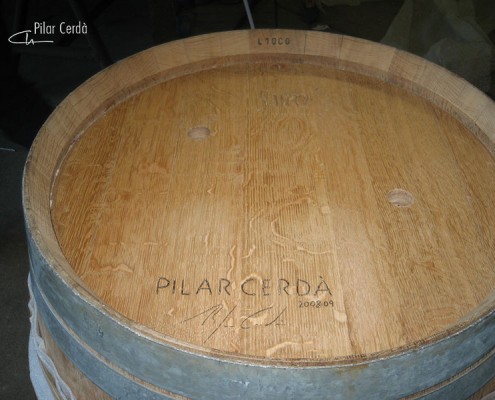 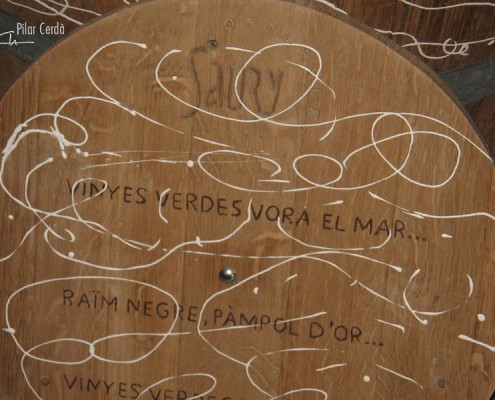 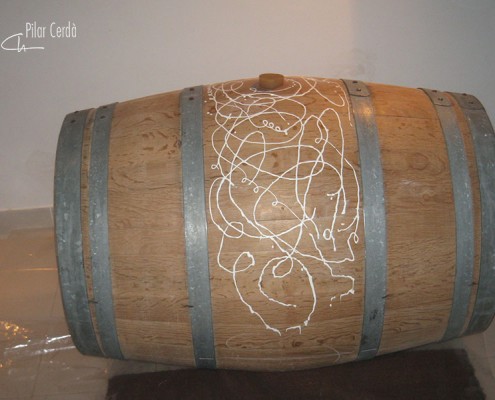 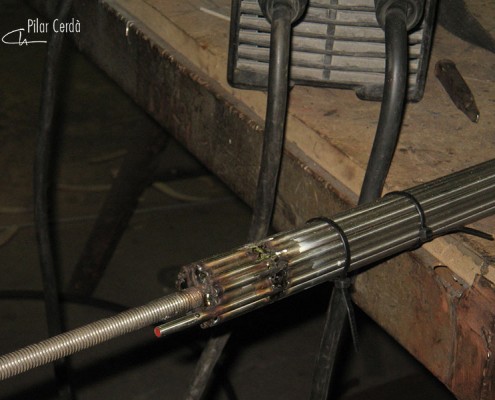 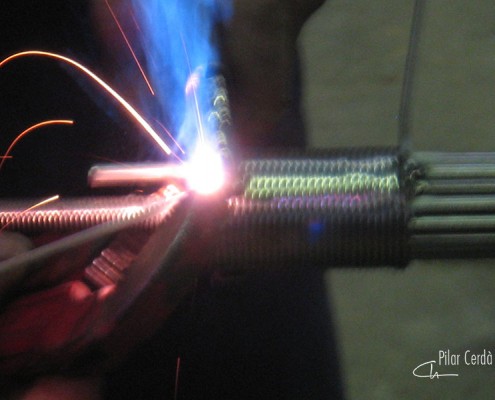 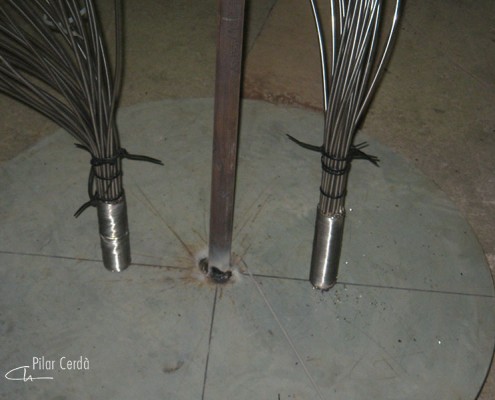 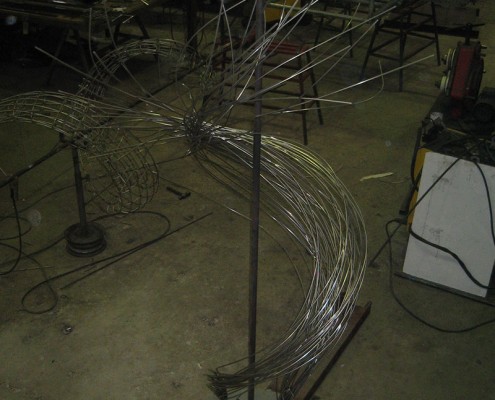 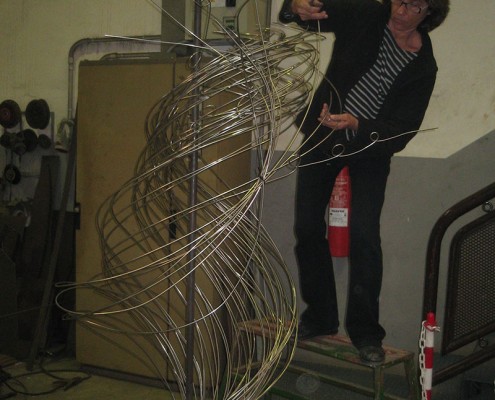 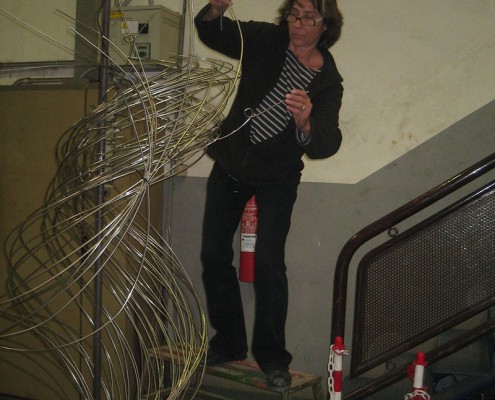 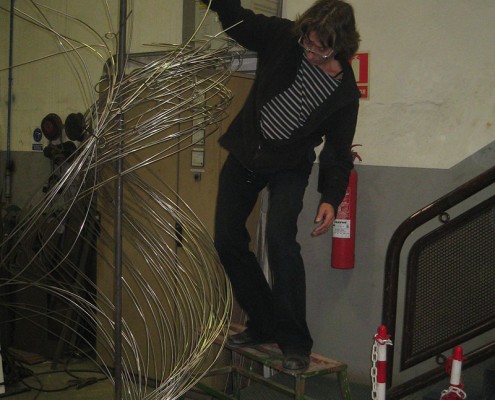 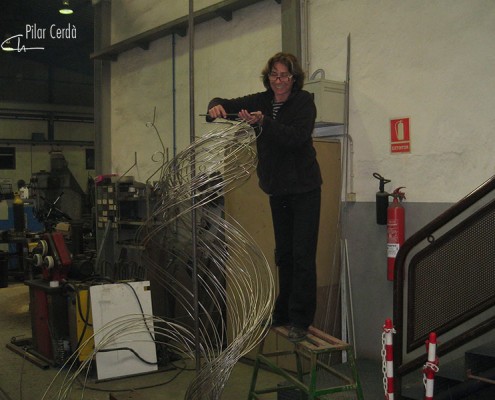 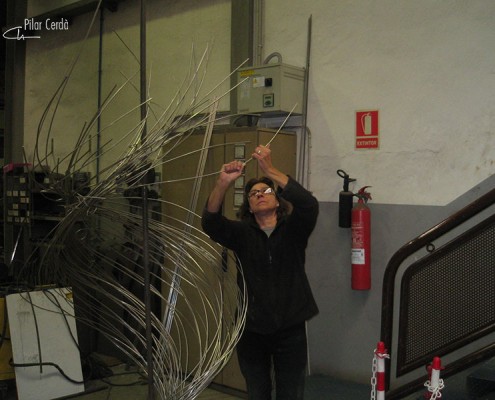 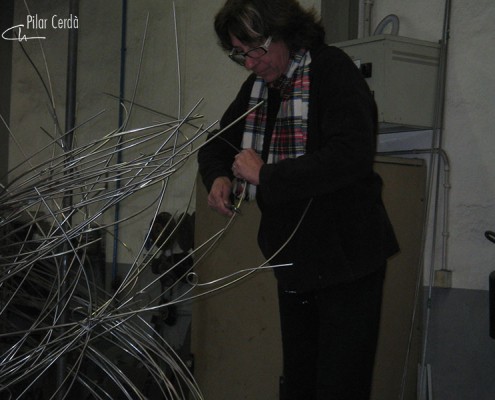 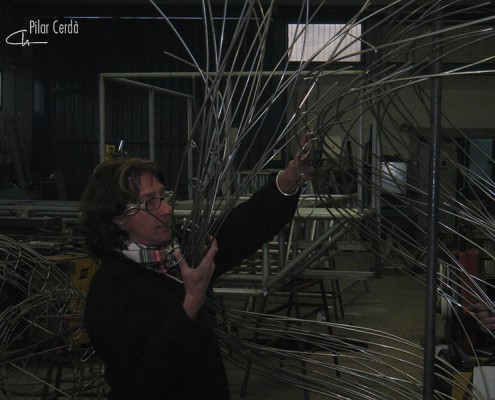 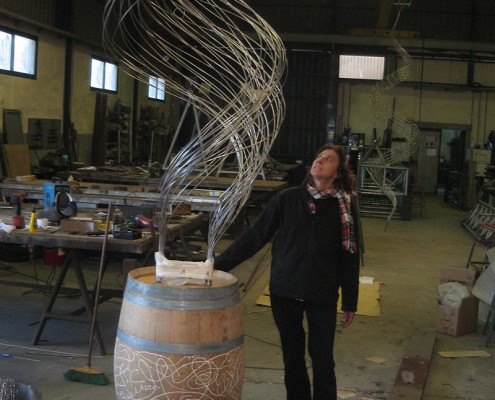 us feu més verdes i encar

al llagut i a la gavina,

Art and the Bicycle