You are here: Home / Press & Reviews

A selection of some critiques that identify the artist.

Review on the professional trajectory of Pilar Cerdà – Subjective Simbolism

As a part of the universal community and follower of the vitalist philosophical systems, Pilar Cerdà, is especially sensitive with the problems of the world and this interest in the human dimension is the engine that generates her creative action.

In this world, which is an effectiveness of excesses and lacks, balance is as important for the human being as it for the universe, which implies a constant adjustment of energetic forces. An adjustment that leads her to explore different themes always connected around the existence of this dynamic power.

In the artist’s trajectory we attend a passionate walk where forms purify along the way. Descriptive features have been revisited as thread-like bodies with significant heads, inserted in a unit providing a strong sense of belonging. From here, volumes and masses acquire a determining role and its mysterious lyricism arouses an action halfway between movement and statism. These identities, although recently hurt by the avatars of history, distill existences and experiences. They are allegoric icons of the epopee of the human being. A tattooed army through the chronicle of time.

Descriptive or anecdotic elements disappear completely, whereas volume, as an exclusive protagonist, lengthens and stylizes no longer representing the concept but achieving a subjective symbolism. A symbolism understood as an ideology which prioritizes suggestion and evocation over direct representation and explicit analogy.

Intuition, protection, sustainability, tenderness, fertility, silence, hope, clarity, empathy, love, woman…these are some of the words that conjugate the ideology of her work, represented over sinuous iron, steel and refractory material figures. Her work is inscribed with the insignia of energy, it is forged over the process of a continuous personal reconstruction and materializes through the synthesis between life and art. It is a composition of several representations in a single act of knowledge. Pilar Cerdà, a woman with skillful hands and a wise look, constructs a personal alphabet of sensual codes and a Mediterranean vocabulary. An alliance described through the sensitivity of an artist, whose priority feeling is the ascetic devotion to the essence of matter and its treatment.

If we approached empirical philosophy we could refer to the existing configuration between the thesis and the antithesis.  As it happens with the capital concepts of Chinese philosophy, whose principles, complementary and opposed at the same time, constitute the foundations of everything and manifest in all cases of mundane contrariety.

Pilar Cerdà holds a watchful eye to the problems facing the world today and she aims to ‘awaken’ dormant consciences to promote beneficial change, ponderous distribution, proportional equality and harmonic balance between human beings and the constituent elements of progress. This is the reason why her work is conceived as a sensitive and hopeful call to communication and harmony between humanity and nature.

“Forms and figures originating from the silence of history discreetly recover their voice in a thousand ways. Like the sound and music present in the roots of nowadays music and contemporary art. They are like dying drums of a lost and won war echoing close and far.

There is an unexplainable but evident kinship between the abandoned slum places in the urban, post-industrial outskirts and the savannahs and natural spaces of the silenced continent; non-productive territories not even convertible into “theme parks”. This abandoned places still preserve a primitive charm due to this abandonment, but at the same time are the scenery of horror and infinite tragedy.

The Swahili warrior, the Hittite, the cronopio…metaphor for the victims, the silenced losers, the irretrievable marginalization, cry out in the nightmare of the powerful who have always been losing themselves.  Maybe the powerful and their subjects (we all are) are the reason why the universal and silent prayer raises…and it takes a thousand shapes of the only possible beauty: the transfigured and transfiguring beauty. This wounded and condemned beauty escapes the ruthless plan and extension of beauty as a business, profitable beauty; it escapes the spectral and cold illumination that wants to take on everything.

The good authentic beauty, the moving beauty is becoming difficult to find, more and more unknown. It drips distant in our conscience; there is where we shall find it, in a militant and utopic nostalgia, almost essential, reflected in dispersed fragments. There will be no truce until the eternal losers of history allow themselves to feel this happy nostalgia.”

“The incipient time in the work of Pilar Cerdà”

“A doubt. The sudden curiosity that overwhelms us with the brief lightning of an unexpected idea and carries a sense of urgency: the need to search. We are overcome by the urge to discover something that already exists, something that others might have revealed, but this discovery is now essential for our own existence.

Philosophers say: every man has to walk his own intellectual path. He has to discover and come to his own conclusions. Even when it comes to inherited questions already answered. It makes no difference that hundreds have already walked the same path. We need to find our own answers. It is this need that makes the appearance of a sign – which we will follow until it drives us to the end of this curiosity – reveal itself as a magic formula. Such an ancient formula as the time of man. A formula that encourages the search of the artist and teases his restless and anxious soul until he builds a world of his very own.

The last work of Pilar Cerdà reflects a time of inflection, a moment of fertile curiosity. This enormous and powerful ancient formula makes an appearance. A challenge capable of fertilizing will and conscience. The answer to the ancient question of “Who are we?” And “Where are we going?” – In other words “Where do find the keys to our current identity?” has taken on an unusual urge in the spirit and work of Pilar Cerdà.

She knows the current average man lives preoccupied in an unlimited expansion of his space of existence, in the progressive loss of his cultural references. She has seen – she can even feel it herself – how the noise of superficial information stupefies her and deprives her of the certainty that was once deduced of every written text. She has experienced the contradiction of this insecurity, originated in the growing dominance of science over the life of man. In summary, she has observed and asked herself once more: “Where is the man’s homeland? Where must his fortress come from?”

For these reasons her last work deals with this “inner look”, this inner search that always discovers new dimensions in the own and other peoples existence. Pilar Cerda’s plastic reflections – sculptures built with industrial and artisan materials, steel, iron, refractory paste and porcelain; photographs; engravings and installations – are focused in this need for self-affirmation that goes through the knowledge of oneself.

For thinking and feeling, living and creating according to oneself is the same answer the man finds every time he starts the task of giving satisfaction to his contradictions and fears, to his passions and curiosity.

We can identify with Pilar Cerda’s doubts and walk the path with her, in our own way, always open to new paths.” 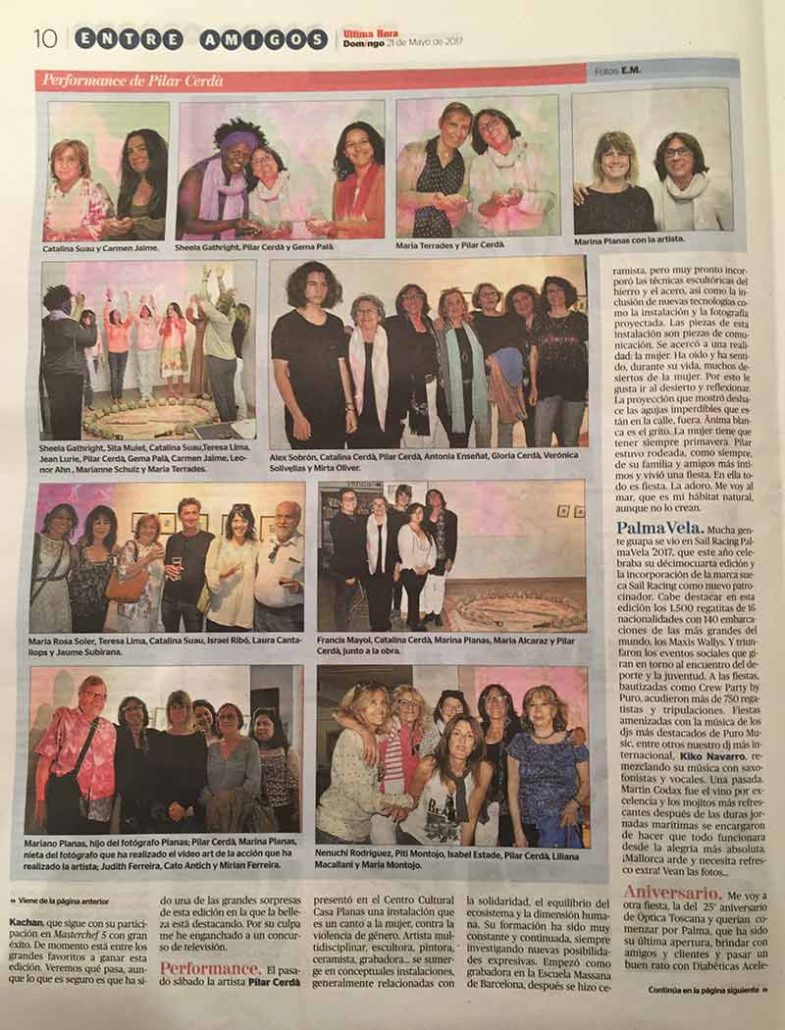 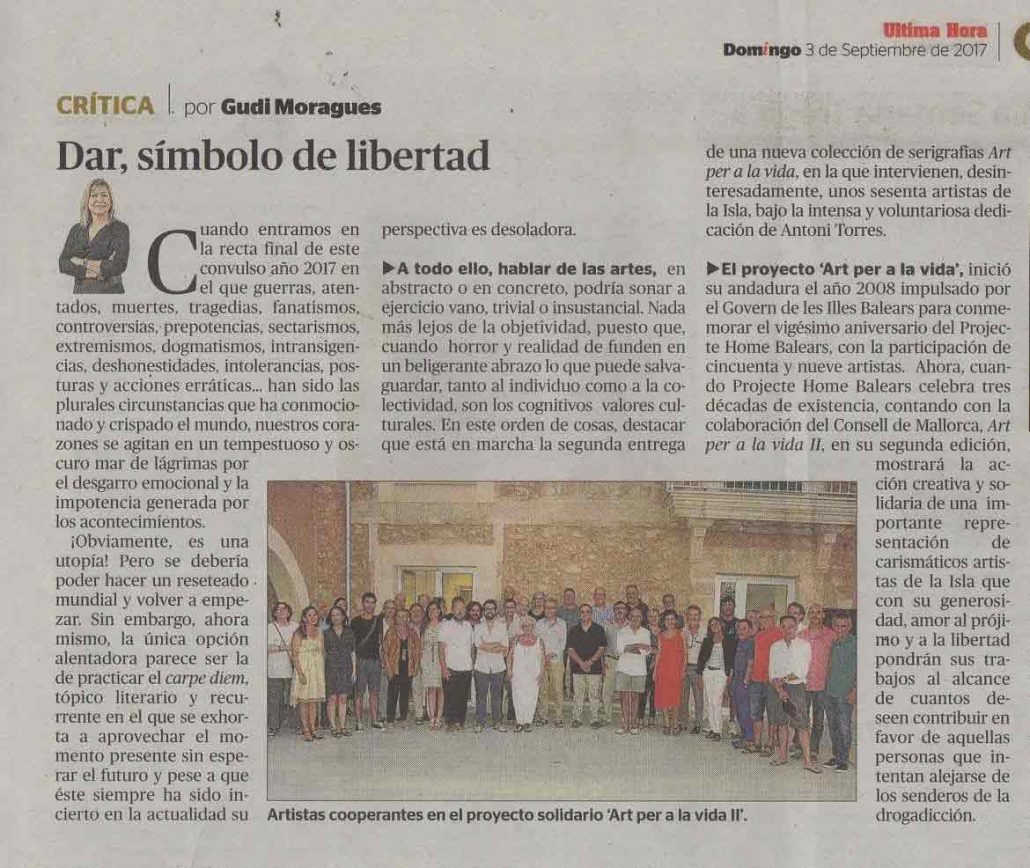 Article by Gudi Moragues on ‘Última Hora’ Newspaper about the instalation of the sculpture ‘Tornada a l’origen’ at the Parc de Sa Riera. February, 2009. 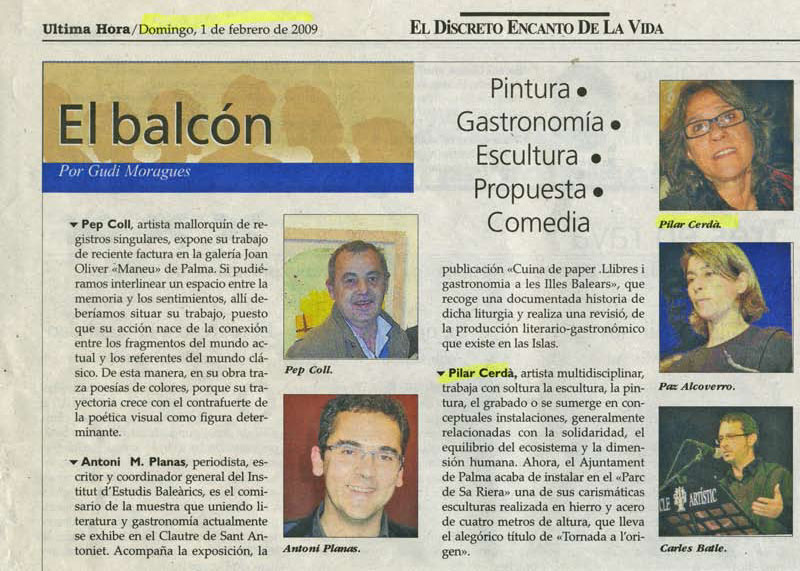 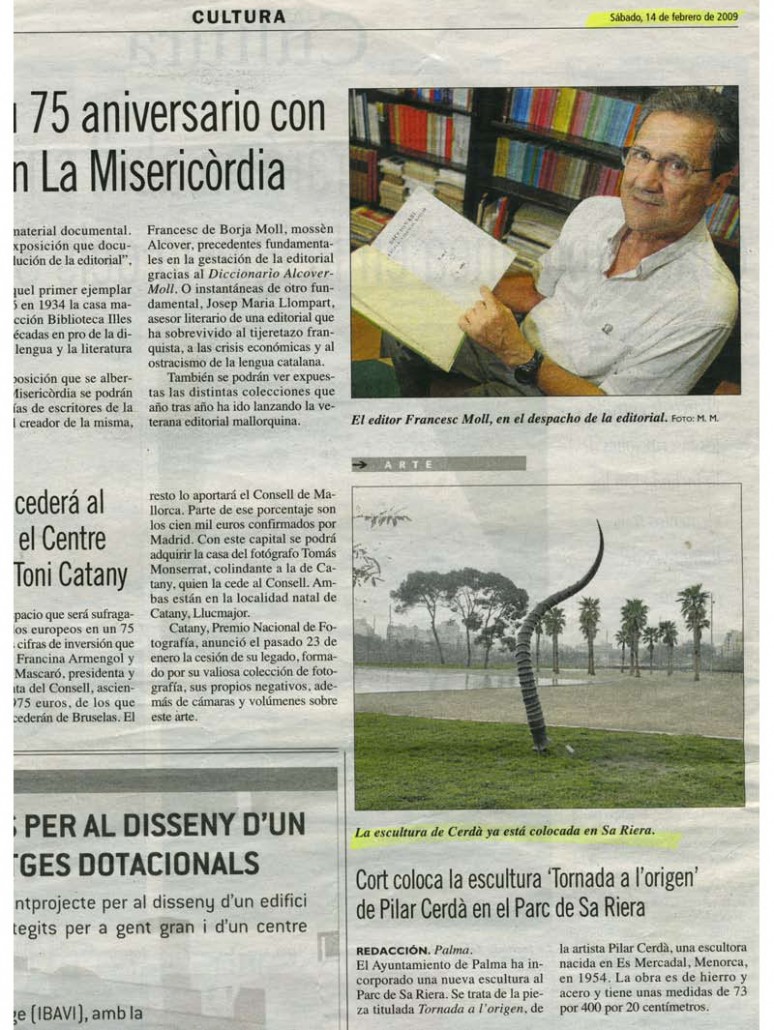 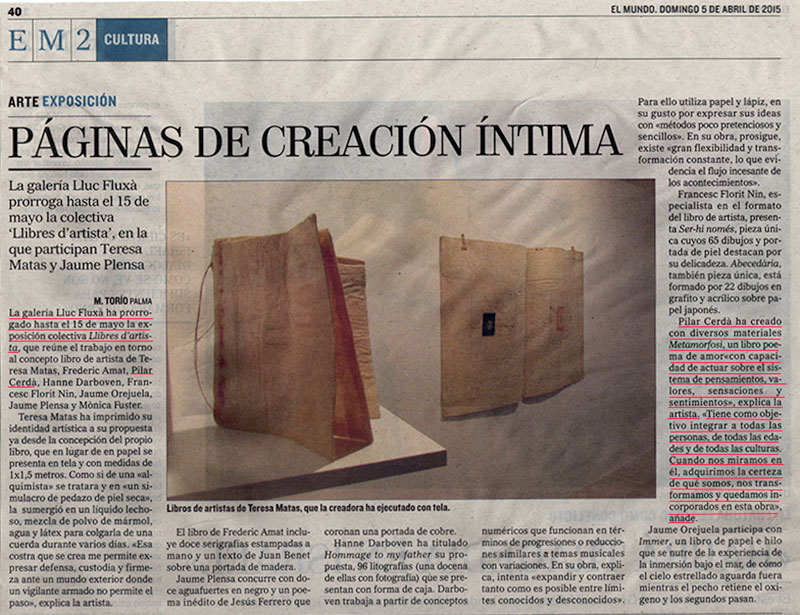 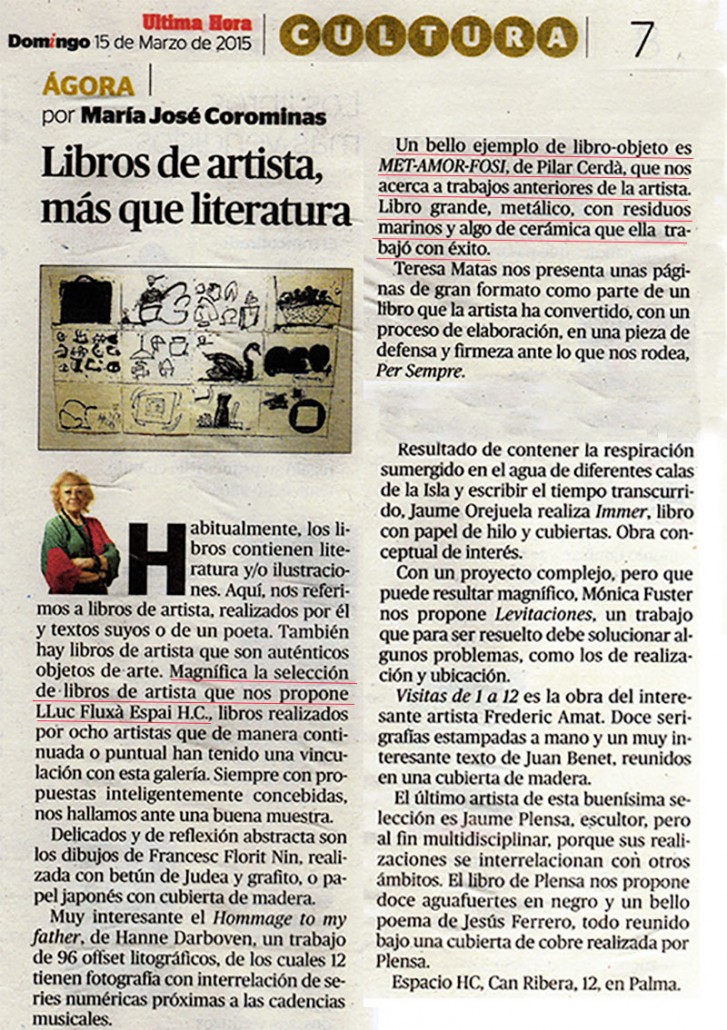 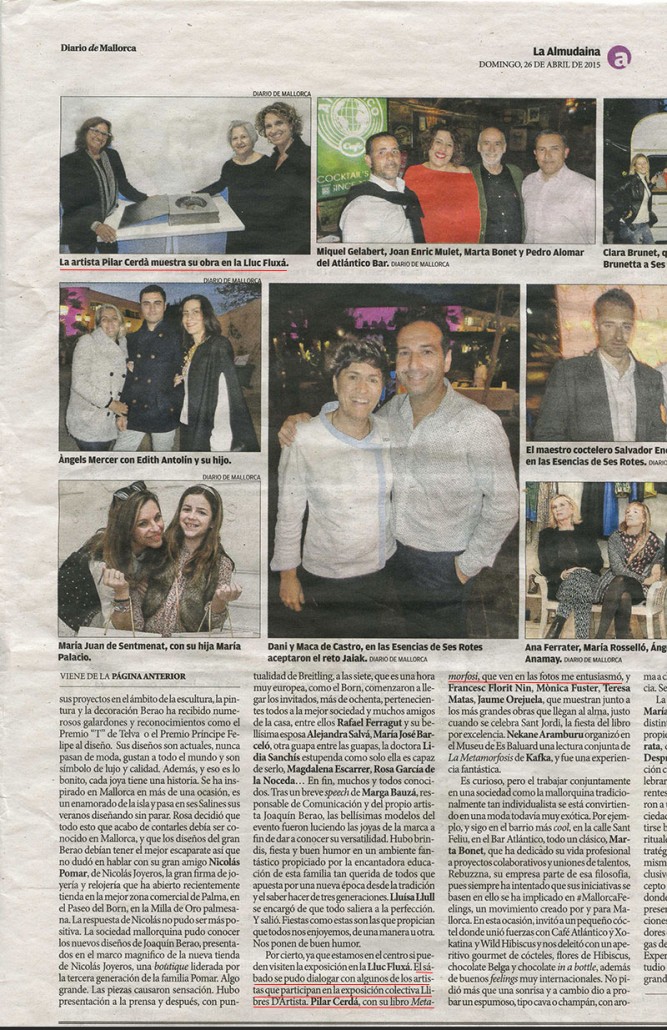 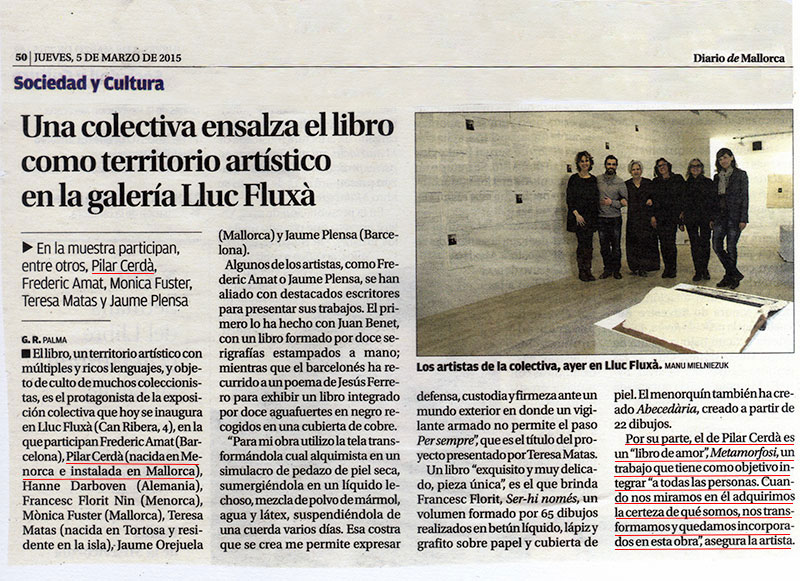 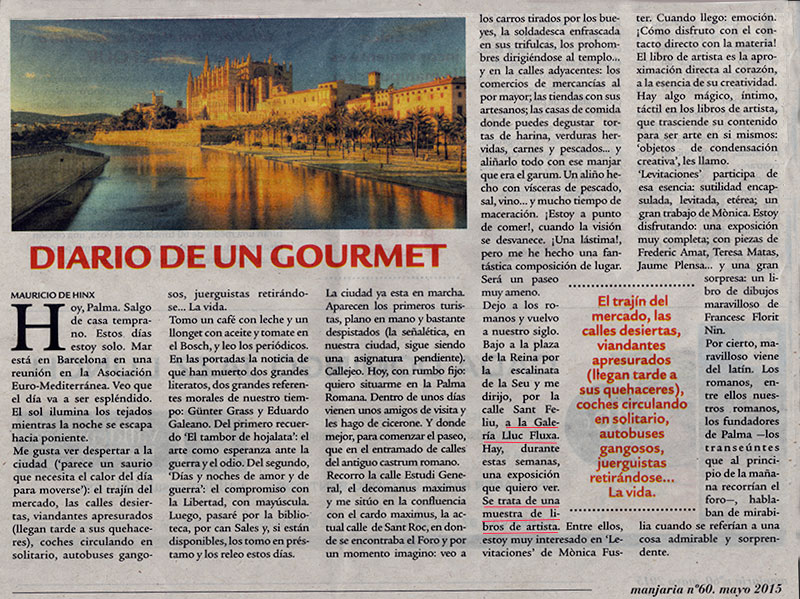